Boulder City, Nevada is between Las Vegas and Hoover Dam. The city was formed to temporarily house workers during the dam’s construction in the 1930s. After the dam was complete, residents incorporated and formed a city. In 2007, Todd Cook opened Boulder Dam Brewing Co.

Today Boulder Dam Brewing provides craft beer in a wide variety of styles. Todd grew up a “military brat” who moved around a lot. In college, a friend had a constant supply of European beers. The offerings from Boulder Dam Brewing reflects this vast geographic influence.

Although Todd previously ran an advertising business with offices in 2 states, he says business experience isn’t necessary to opening a brewpub. The only restaurant experience he had was working at McDonald’s when he was 16. Instead, Todd learned from Running a Restaurant for Dummies and Guerilla Marketing.

Not too bad for coming up on Boulder Dam Brewing Co.’s “8th annibrewsary” in February 2015.

Some of Todd’s advice in this episode:

From l.seber: What are the best classes to take to prepare for opening a brewpub?

You can reach Todd Cook and Boulder Dam Brewing Co. at: 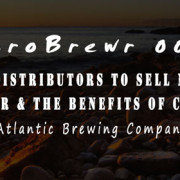 MicroBrewr 009: Getting Distributors to Sell More Of Your Beer and the Benefits of Canning w/ Tyson Starling
1 reply